"Your work is going to fill a large part of your life, and the only way to be truly satisfied is to do what you believe is great work. And the only way to do great work is to love what you do. If you haven't found it yet, keep looking. Don't settle. As with all matters of  the heart, you'll know when you find it."

"Innovation distinguishes between a leader and a follower." These famous quotes are by none other than the great Tzar of Technology - Steven Paul Jobs or otherwise popularly known as Steve Jobs of Apple. I read his book - iCon. I got hooked reading about this man, whom people worship and look up to as their idol. The name is revered worldwide.

An adopted child, a college drop-out, with a burning passion, to create something different right from early years seemed to be setting a stage for achieving something great. Working out of a garage with his friend Steve Wozniak they created the first Macintosh. Subsequently Apple went on to create the iPod, the iPhone, and the iPad as we all know. His work in three different genres - computers, music, and movie animation speaks for the genius Steve Jobs was.  This man had that Midas touch. He was the driving force with his intuition of futuristic outlook and made Apple the most successful company that it is now. His motto was to build a great product which had to be great looking, smart and at the same time be user-friendly. You just have to listen to his talks and you will be mesmerised. His Aura and charisma became an inspiration for millions across the world.

At home, my husband and kids are technology enthusiasts. I am still in the old, traditional mode and often get teased by them. The first Computer that we bought was in the year 1996. I remember when I came back from my mom's home after my first baby, this was the surprise that my husband had in store for me. When he explained its working it all turned out to be Greek and Latin to me. I was too wary of even touching it leave alone using it, considering the cost!

As the kids grew older, discussions centered around the latest technology, to which I was a mute spectator. And when the discussion turned to Apple products there was always that dreamy look of wanting one, but the price being a restraint. The first Apple product that came home was the iPod in 2007 when my husband had gone to the U.S. Children just couldn't wait to lay their hands on it. And it was time for celebration when it made a grand entry. All of them were totally mesmerised with it. Since I love music, I too enjoyed listening  to music on it. This was our first experience of using an Apple product. This was followed by the mini iPod. I remember there were extra stickers of Apple when we bought the iPod and the children stuck it right on top of our Samsung T.V. When some guests visited us they saw the Apple logo and asked us when we had bought an Apple T.V? Steve Jobs would have had a fit of rage at the very idea of T.V, as he thought television made people dumb.

A few months back my husband decided to buy a new laptop. We went to the Electronics store and were looking at different models. The sales person there routinely pitched in monotonously about the features of various models. But I could see my husband eyeing the far end of the counter and yes I should have guessed it was the Apple counter! Apple have their own trained salespeople I guess. When that guy started explaining the features, I was stuck by the difference. Here was a guy who was not just doing his job, but he actually loved it. The passion, the awe and the reverence with which he explained the working of the MacBook, I was wonderstruck. He was totally an Apple fan. This I have noticed is not restricted to one store - you just check out any store, the Apple counter salespeople are different. So our love affair with Apple continues with another addition to the Apple family - the MacBook Air.

So even if you are not so much into technology, I would still recommend that you read the book and listen to Steve Jobs and you will know why he is truly The iCon and motivated me to write a blog post.

Posted by shobhana shenoy at 7:27 PM No comments:

When all the world leaders are talking about climate change and discussing ways and means to find solutions to this problem, I thought that the idea of "Open Streets" was a step in a very small way to work towards this goal.

I saw the posters and heard the radio spots about something called "Open Streets" being organised on 20th September - a Sunday, in the area where I stay. We got to know that there would be no traffic allowed in the entire residential layout. We were curious to know what this was all about, and so my husband and me set out to know more about this novel idea. As we came out of our apartment the first thing we noticed was a group of people assembled arguing with the cops as to why vehicles were not allowed to ply. Maybe they were not aware that vehicles were prohibited from 6.00 am to 9.00 pm.

As we continued, I noticed for the first time how wide the roads actually were. After eons we found we could walk freely as we pleased, even right in the middle of the road, without having to look around for those impatient drivers in their cars or autos or the blaring horn from the bikes or the buses whizzing at breakneck speed. This I thought was ultimate freedom. Added to that was the bonus of breathing in a lungful of fresh unpolluted air. Later I learnt that the pollution level i.e., the particulate matter had come down by close to 30% and the noise decibel had dropped to 11.5%.

Just as we turned a corner, several children were whooping with joy and riding on their bicycles and skateboards all over the road. They reminded me of my Enid Blyton Books where they would describe children coming back fresh from summer vacations looking all rosy and rounded. This was no summer vacation, but the children their cheeks all red, eyes glowing and smiles not leaving their face was a sight to behold. The children had just found what it was to be a child once again - Happy and Carefree. We saw several families walking down with their children, all of them sweating profusely because be it kids or adults we have now gotten used to walking less. I thought this might just do the trick of bringing down the national index of people suffering from diabetes and other diseases caused due to lack of exercise. 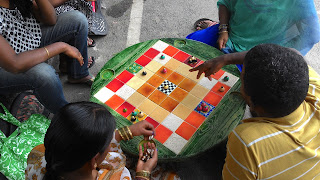 As we walked down the road, people had crowded around a potter who was spinning his wheel and children and adults alike trying their hands in creating their own version of vase, bowls, and other odd shaped articles which they then carried proudly back with them. In another corner, children were sitting on the road and painting with great concentration. Some children with their parents were using the road as their canvas and drawing beautiful figures with different coloured chalk. There was one that captured my attention and that was a huge figure of Lord Ganesha drawn by a boy who I came to know was actually living in a hutment closeby. What talent!

Games like Chess, Ludo, Snakes and Ladders, Chinese Checkers were being played with gusto on the road where the Chess Board, Snakes and Ladders were actually drawn on the road, and children were rolling out the huge Dice and going up the ladder and walking down the Snakes literally. An old man was playing  chess with his granddaughter with curious onlookers cheering them.

That day children and adults got introduced to our traditional games of Twelve Houses played using shells, Pagade the age old game mentioned in The Mahabharath, Five Stones, Lagori, Carrom, Badminton, and so on. Families got together with other families who till then were complete strangers forming teams to play Cricket, Football, Hopscotch you name it. It was all there being played by one and all as one big family.

As we were walking back, we saw a group of teenagers trying to fly a plane which they had modelled out of thermocol, and using the law of gravity after several tries they got the plane to fly and land with thread being used as the navigation aid. They got cheered and applauded from all the bystanders.

We missed watching the play that was organised and the evening show where a Music Band was playing. But I must say this was one unforgettable experience for me.

The most positive aspect that I saw was that people had gotten away from all kinds of electronic gadgets that gets them so hooked up. Mobiles on that day if used was for the sole purpose of capturing the pure essence of joy and festivity all around us. The reason for having an "Open Street" was different, but as a parent I saw that this was the perfect way to once again rekindle the joy of bonding as a family which was sealed that day between parents, children, grandparents, neighbours and strangers alike. It was like one big Family Day Out.
Posted by shobhana shenoy at 10:29 PM 4 comments: