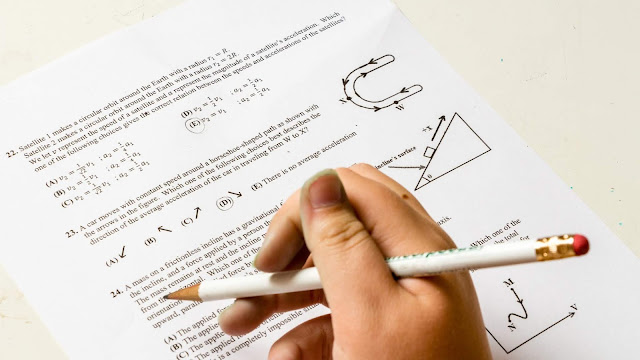 In the last four years, whenever I saw the newspaper headline saying 'Common Entrance Test results announced', I would heave a deep sigh of relief. Why? For the simple reason we were now out of this ordeal. I took sadistic pleasure in passing on the baton to the next set of parents and students!

However, I can never forget those two gruelling years when children had to decide on their professional careers and the preparations that they had to go through to get into a decent professional college. India, like many other Asian countries is highly competitive. (You can read about and watch the exam frenzy in South Korea here and here)What with lakhs of children appearing for entrance exams for admissions into one of the thousands of professional colleges!


This series of blog posts documents the process, the upheavals we went through when our kids were preparing for their entrance exams for professional colleges. Our experience might help parents whose children are currently in their 11th or 12th grades.

First up, do not expect this to be a smooth sailing, physically, mentally and emotionally. However, do not forget that the most important person here is your child. Let your child decide what their dreams and aspirations are. Do not force or expect your children to try and fulfil your dreams. This would be a highly explosive situation, which both parents and children will find tough to recover from.

Remember, your children at this age are also going through very rough times. They now think that they are almost adults and know what is best for them. They make their own decisions and do not like parents to tell them what they should or should not be doing. You can guide them and discuss the pros and cons, but the final decision should always be left to them.

Getting back to my experience, once my elder son was clear that he wanted to take up Engineering stream, our search for coaching institutes began. Here, I have to tell you that the need to take up external coaching through one of these Institutes is completely dependent on the child's work ethic (the ability to be focused, diligent and extremely goal oriented) apart from the confidence to handle the exams on one's own. Wait! there is also another option. You parents can don the mantle of a teacher if you so had a dream at one time. Yes, I have heard of instances where the parents take a sabbatical for two years to coach their children themselves! You have to be good in core science subjects though. So the choice is yours.

Coaching Institutes are another story. The bigger ones have their own entrance tests to qualify for admission into these Institutes. What an Irony! And all this to help your child prepare for the entrance exam to get into a Professional college!  So we were elated when it was announced that the school in which my son was studying had tied up with one of the leading coaching institutes which would give coaching after school hours.

Hurrah! We felt happy as the advantage was, that the venue would be their own school. Commuting would be nil. Also, there were so many children from our apartment, that we parents could take turns to pick up children at 8.00 pm when their classes would end. The only negative being that he would be spending almost 12 hours at the school! But considering other options, we all felt that was not an issue at all. On the D day, we wished him all the best. He gave his Entrance Exam and we all waited with bated breath for the results to be announced. Well, destiny had other plans for him I guess. All our well-made plans came to nought when he told us that he did not make it to the final list.

This spelt trouble for us. So we spent time googling various other coaching institutes, their success rates, the fee and of course the distance. Our research helped us zero in on one of the best coaching Institutes. However, we also discovered that even among the one that we had shortlisted the best Professors were at their main centre. Now, this was a good one hour's drive from our house during peak hours in the evening.

However, the first priority was to see to it that our son got through the Institute's Entrance Exam. We thought logistics could be worked out later. Much to our delight,  he had cleared the Entrance and had got admission at the Institute. We were relieved. He had made it and had crossed the first hurdle. Hurrah again! Little did we realise that this was, but the first step.
Posted by shobhana shenoy at 11:07 AM