'Master Chef, Australia' was the key inspiration for my children in their gastronomical journey. My elder son who is a foodie loves to taste different cuisines. He became quite enthused and started going through the recipe books which I had bought long, long ago. Well, I never got to be Julia Childs! You guessed it right, not a single page had been opened neither was a single recipe tried. So I was happy that my son was at least trying out some recipes from those books.

He made Noodles, Pasta Arabiata, White Pasta, mocktails like Fuzzy peg and so on. Barring our traditional cuisine, he loves all the other cuisines, and hence when he plans on cooking, we can expect tasty Continental dishes. Not that I am complaining, because not only we, but even his grandparents enjoy it! In addition, once in a while he would also help me roll out chapathis, puris, and so on. The moment I try new recipes his face lights up and both of us try and prepare it together.

Coming to my younger son, according to his hierarchy he joined my elder son as his sous chef! You can imagine him being bossed around by the Master Chef! This was however not to his liking, and after just about couple of times in the kitchen, he felt that cooking was not his calling and so there was me, who was promoted to the role of sous chef, when the post fell vacant!

Right from his childhood, my younger son's staple food both for lunch and dinner was curd with rice and mind you with no seasoning, with only one or two of his favourite vegetables. Parathas, Aloo parathas, chapathis were a big no with him. Every other dish would be spicy or not his favourites. In a way, it was very easy for me to plan a menu when he was around. It did not require too much of planning, did it now?  He was totally the opposite of my elder son and was loathe to experimenting with anything new. His taste palate dictated simple non-spicy, regular comfort food and that was curd rice! His knowledge of cooking I must say was zilch.

So, when he had to go abroad for his studies, he just did not know A or in this case C of cooking!  Nor did he have a clue as to what ingredients go into what. Since this came up suddenly, I did not have enough time to teach him the basics, as most of his time was spent running around for visas and in completing other official formalities. So my only solace was, that he was going to stay with three of his seniors and I fervently hoped and prayed that they would at least know some basic cooking, enough to sustain them.

It turned out that I was fretting for no reason at all! Why? because it so happened that one of his senior housemates was an accomplished Chef! No not in the actual sense, but cooking was his hobby! So within a short time of them settling down, this Master chef with the other three sous chefs, worked magic in the kitchen in that far off land. The pictures of these gourmet dishes sent by my son, made even a pro like me look like a trainee. :-(

The pictures were something out of a food magazine. He sent pictures of absolutely delicious looking hot and spicy Vegetable Biryani, yellow sizzling Dal tadka with fluffy white rice, nicely roasted parathas, chapathis with vegetable kurma, yummy looking aloo parathas with curd and pickle, a melange of colorful Pav Bhaji ..... the list was never-ending. Not only did it look mouth-watering, but they also had the time and patience to plate it beautifully. It sure did cross my mind, that I might want to go on a sabbatical to their place! 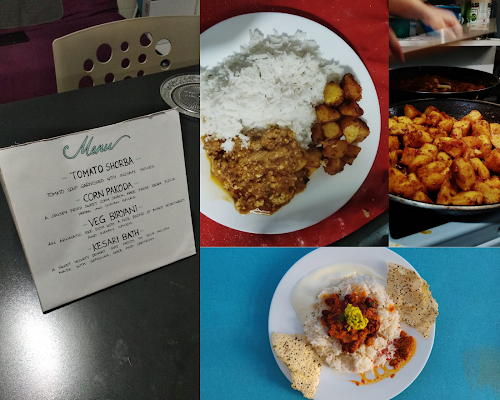 It was such a joyful moment for me to see my son, who used to run miles away from the kitchen, was now not only learning to enjoy his cooking lessons but learning to enjoy eating food which he would otherwise curl up his nose when I used to make it. What I really admired about them was they were managing to make all these gourmet dishes while juggling with their hectic study schedule. Can you imagine that in an alien country he was eating home-cooked desi food?

Breakfast was not at all on their list, as he said there was no time. Lunch would be a simple sandwich or salad which he would pack to college, he told me that he could not afford the canteen food. Dinner however was an elaborate affair. It was very touching as well as a proud moment for me when he sent pictures of his very first solo attempt at cooking. Yes, no prizes for guessing what it was - curd rice with seasoning, plain rice, dal tadka, and carrot and potato curry, which he said, his friends ate heartily.

We were really astonished when they threw a grand Diwali party to their house owners of foreign nationality in that distant land! This was a party where all the four children had whipped up a mouth-watering four-course meal, complete with a beautifully designed menu card explaining what each dish was....totally five star way! The pictures say it all!

I guess life really teaches a thing or two when you are on your own. What a delightful gastronomic journey this has been for him. Can you keep a secret?  I am planning on hanging up my apron when he comes home for vacations and let him treat me to some of his delicacies!
Posted by shobhana shenoy at 12:43 PM

This one shows your humourous side, made me smile as I read, enjoyed this one as well ... Our kids don't cease to amaze us....and yes please take a break when he's back and enjoy his culinary skills. Keep writing....we love💕

We do get to see different facets of our children. It is always a pleasure to see them rise up to different challenges. Thanks for your lovely comment.

Kids do find their new talent in their journey may be out of interest or necessity. It's good to see them evolve . Very well said that they never cease
to amaze you. Keep writing Shobhana.

The same i realized when my younger son went abroad.along with other two boys he did a good job making some delicious dishesInfact he told me that when I go there he would treat me with his cooking..Thanks Shobhana.it was wonderful reading your blog.

Beautifully penned down too! :)

It's always a good feeling when you slowly start at the bottom with no knowledge at all and then climb up the complicated dish ladder. I too faced pretty much the same since ammana Pura korche ashile. Didn't have a chance or rather, didn't feel like i had to learn that aspect as such. But luckily, before my departure for Germany, dad taught me the basics and some complex dishes (main idea was to just say yea yeah and then eat the dish ��).

Now with the advancement of YouTube and some lovely channels, it's easy to follow and you will definitely be proud once the dish is aesthetically pleasing and also delectable.

Shobhan, you have nailed it so well and most of the time reading your blog was mouthwatering. Next time I visit your place we would just hang around and let the boys do the culinary specialities that they have learnt and we will just enjoy. Love you.

Thanks all for sharing your experiences as well as the experiences your children have gone through. @ Pranav Nayak, You surely have mastered your culinary skills. Making amchi food popular too! Next time please do treat us when we all meet up. I guess we must have a family gathering where the cooking must be done by all you cousins :) would be great!

Fabricators use sheet metallic to create merchandise present in a variety of|quite so much of|a big selection of} industries. Find out more about sheet metal’s popularity with this record of 5 advantages of utilizing sheet metallic fabrication in building. This course of is usually used when the specified best lifeguard straw hat outcome is a clean curved floor to the metallic. For instance, shapes similar to cylinders, cones and rounded architectural features should ideally be made utilizing roll forming techniques.

3D printing has entered the world of clothes, with style Humidifiers designers experimenting with 3D-printed bikinis, shoes, and attire. 3D printing has come to the purpose where corporations are printing consumer grade eyewear with on-demand customized match and styling . On-demand customization of glasses is possible with rapid prototyping.